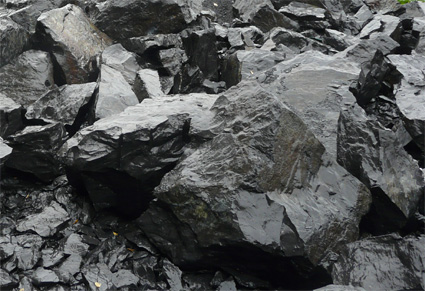 Shungite – one of the oldest rocks of our planet, the geological age of which is more than 2 billion years. Shungite received its name in 1887, when the first in the world large deposits of this carbonaceous rock were found in the South Karelian village of Shunga. Until now, Karelia is the only place where shungite is mined on an industrial scale.

Healing properties of schungite
The reason for the diverse therapeutic properties of schungite and its widespread use in folk medicine is the special molecular structure of this stone. The presence of fullerenes in the shungite and the unusual structure of the carbon matrix is a characteristic feature of the structure of this mountain mineral, which determines a number of its unique physical, chemical and medicinal properties. Shungite stone has bactericidal and catalytic properties, has been successfully used for many years in the systems of purification and activation of drinking water. Shungite-charged water is a molecular-colloidal solution of hydrated fullerenes. It has anti-inflammatory, bactericidal, antiseptic, analgesic, anti-allergic and immunostimulating effects on the human body. For the treatment and prevention of various diseases, not only shungite crushed stone (for water infusion and therapeutic massage), but also various shungite products (plates, discs, pyramids, jewelry) that help neutralize harmful electromagnetic emissions and reduce the negative impact on the human body of geopathic zones.

Shungite is a natural filter and water activator.
Shungite is an excellent and almost universal natural adsorbent capable of retaining on its surface more than 94% of all possible harmful impurities contained in the daily tap water we use. Shungite filters are able to purify water from heavy metal salts, colloidal iron, radionuclides, chlorine, phosphorus compounds, nitrogen (nitrates and nitrites), petroleum products, pesticides. In the efficiency of water filtration from dioxins and organochlorine compounds, shungite surpasses the famous activated carbon 30 times. On the quality of water purification from oil products, shungite is also not inferior to the activated carbon filter. With the help of bactericidal and sorption properties of shungite, it is also possible to filter out drinking water qualitatively or to purify water in wells and swimming pools from various harmful microflora, spores of plants, algae, viruses, biological toxins, helminth eggs.

Magical properties of shungite
Shungite has a wide variety of magical properties. All jewelry with a stone helps the owner to accumulate vital energy, to repel negative information. Shungite amulets provide reliable protection against black forces, relieve fear and give their owner a sense of peace. Amulets of shungite help in love affairs. Mineral especially supports young, active and energetic people. Talismans made of schungite for home and office can be made in the form of a variety of shapes – balls, cubes, pyramids. Shungite talisman in the form of a cube draws luck in commercial projects. Shungite pyramids provide reliable protection of the house from dark forces. Shungite talismans in the form of a ball bring success to their owners in love affairs. Any shungite products protect against electromagnetic waves, which emit household appliances (televisions, computers, mobile phones, microwave ovens).

Application of shungite in industry. Mineral composition, physical and chemical properties of shungite.
Shungite is a natural composite whose structure is an amorphous microporous quartz framework filled with highly dispersed (about 1 μm) particles of minerals of the aluminosilicate series. In the mineral composition of schungite – on the average 70% of carbon and 30% of ash (40-50% of which is silicon oxide, 12-25% of aluminum oxide, the rest of the mineral ash contains oxides of more than 20 macro- and microelements – Na, Ca, K, Mg, Fe, S, Ni, Ti, Mo, V, Cu, As, Ce, W, etc.). A unique feature of shungite is that, when it interacts with water, shungite releases only minerals most useful to the human body.
Shungite is characterized by high density, chemical resistance, strength and calorific value, as well as electrical conductivity and a unique ability to screen high-frequency electromagnetic radiation.

If you have already bought a shungite, and want to check its quality, then check it for electrical conductivity.
This is the most reliable way, because none, even remotely resembling shungite stone, doesn’t have such properties.
For testing, you need a light bulb, a 9 volt battery, and 2 wiring. Connect them in series, the light should light. If it is not lit, then you don’t have shungite in your hands, but its substitute. It is better to get rid of it.