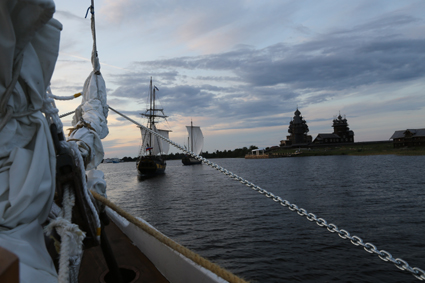 Karelia is the only place where there is schungite.
In Russia as in no other country around the world there are many extraordinary places that are magnetizing all voyagers into the unknown. But in sacral series, mystical territories of Russia, Karelia is taken the special part.

It is well known to majority of tourists as the brink edge of thousands of lakes, picturesque northern nature, exciting pathways, majestic Volaam and inimitable Kizhi , the Republic of Karelia – is the trully mythological and dreamlike place.

Many secrets and riddles have been kept for a long time on its territory. Legends have been passing on from generation to generation during thousands of years and stayed untouchable on this area. Traditions and culture carried over from lip to lip by forming particular, spiritual and cultural genetic pool of Karelia. The attractiveness of Karelian region is revealed not only in described a few times beauty of forests, lakes, and rivers, but in the strongest unintentional sensation of magical array transfused through the whole earth.

The energy of its place – is the remote resonance of “Hyperborean times”. As distinguished from the majority of other regions (85 regions) of Russia, the sightseeing of mentioned above is, highly researched and described, our region still can surprise and present new acquisitions and open new horizons to researchers around the world. Karelia is the Russian Lapland-remote, semi-fairytale country where all miracles are possible to happen.